Remote work has forced organisations to create major changes to their business models, pushing for staff productivity in an ever-growing digital world. Whilst staff are working remotely, security is a major concern and many organisations have spent thousands trying to adjust their infrastructure. Microsoft’s integrated security solutions aim to enhance security and user productivity cost-effectively.

When taking a closer look at the productivity chain of your organisation the helpdesk plays a significant role in business productivity levels. If employees are not able to access their work, they become significantly less effective and there is often a time lag for the helpdesk to fix their problems. Having a helpdesk can play an integral role in organisation-wide productivity levels, and this blog will address how Microsoft 365 is helping to ease the strain on them.

One of the most common reasons for a call to the helpdesk is for a password reset inquiry. These calls result in a loss of productivity due to the employees being locked out of their devices. They are not only annoying but take valuable time out of the helpdesks time to reset and address, the overall costs adding up significantly.

The best way to address this is to eliminate passwords entirely. Microsoft now has a built-in capability to support password-less authentication methods such as biometrics, PINs, and FIDO-2 security keys. Because these methods are encrypted and stored locally, they are more secure and easier for employees, which will, in turn, reduce your costs because staff won’t forget them. As an example, Microsoft adopted a password-less approach, and the costs of supporting password help dropped 87%.

Twice a year Microsoft releases updates for security and new features. Typically, these features are easy to adopt, however if you are using non-Microsoft products for endpoint detection or antivirus it can complicate the overall process.

Having incompatible products prevents users from updating and thus causes a problem for employees who need to reach out to the helpdesk for support once again costing time and effort. Furthermore, while this is occurring staff also can’t utilise the productivity and security features of the newest release, causing lower productivity in general.

Microsoft 365 has its own built-in antivirus and Advanced Threat Protection capabilities that can utilise artificial intelligence to block malware and other viruses. Having these functions can free up time for your helpdesk further.

Empower users to be self-managed

Any time employees need help setting up new devices or adding accounts the helpdesk is often involved. Employees working at home now must take on more responsibility for their security. Common issues that have occurred during remote work for many employees are not applying security patches promptly, downloading apps with security flaws, and many more. Attackers can easily leverage these vulnerabilities to gain access to sensitive company resources.

Microsoft Endpoint manager makes it easier to provision, update, and manage laptops. Integration with Azure and Intune allows the installations of work-appropriate apps that employees can choose to download through a portal. Security policies can also be enforced on Endpoint meaning that all employees must be up to date with updates, define PIN requirements, or install threat protection.

Endpoint can once again save the time and effort of individual cases and calls with a standardized approach that promotes productivity. 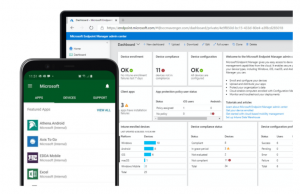 To learn more about security and how your organisation can benefit from Microsoft 365,  reach out below to talk to one of our experts.